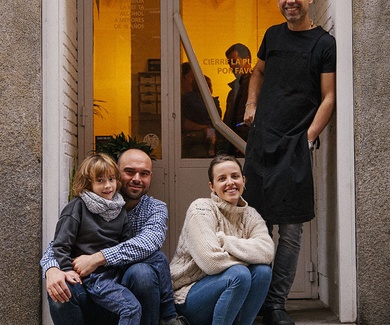 Plenti is a project in which the main idea is it combine healthy, original, quality homemade food & drinks at an affordable price, whilst offering a friendly and relaxed service.

In 2015 Sophie and Gonzalo who had been living in Madrid for many years, decided to head to Brighton (UK) for a year and learn in more depth the ins and outs of the "cafe culture" and breakfast & brunch scene. After a year of hard work they filled up a transit van with tables, chairs, cutlery and pretty much everything you can see  in the cafe; crossed back over to Spain on the ferry marking the first step of plenti´s creation.

Two close friends decided to jump on board and follow out this dream; Miguel who is in charge of the food aspect creating the menu and Franzis focusing on the bureaucratic side.

After finding premises in the central Madrid neighbourhood "barrio de las letras" and doing a small refurb, on the 30th of May 2017 plenti´s doors finally opened to the public; a dream full of enthusiasm built between friends!

The british influence is very much reflected in the menu, offering porridge, baked eggs, soups, salads, quiches, and cakes all of which is homemade.  There is however one speciality which differs and thats the "smorrebrod"- a typical dish from scandinavian countries consisting in a base of rye bread topped with yummy ingredients. At plenti the guacamole and hummus ones stand out!

Drinks wise their coffee which is roasted locally and changes origin depending on the season is definitely a must try. They also offer a selection of loose leaf teas, soft drinks such as ginger beer, chai lattes, wine, beer, and freshly pressed juices ( the carrot apple and ginger being a favourite!).

To sum it up, plenti is an alternative to the traditional spanish cafés, bringing a little bit of British and Scandi culture to the spanish capital.